Posted on April 10, 2017 by billboyheritagesurvey

Hard to imagine but these 2 components constitute a 2.4GHz RC transmitter. Missing are the controls, power supply and antenna but the guts of the thing is smaller than a credit card. All that’s required is some patient soldering and the correct code uploaded to the Ardunio Pro Micro board via its USB socket and a programmable transmitter is possible.

The idea was developed by US Kapper Dave Wheeler who exploited the small size of the Pro Micro board to produce a neat hand held unit: 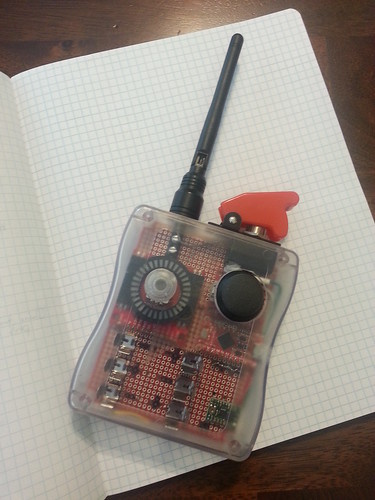 Dave Wheeler’s design placed all control on a single joystick with shutter release as a push function. I have used this and found it very difficult to get precise pointing, keeping a fixed camera alignment and pressing the shutter was impossible without huge levels of concentration. I’m not one of the xbox generation so joystick ‘twitch’ control is not a skill I have. The Wheeler design evolved and incorporated an LCD tell tale screen to give the operator an idea of the camera orientation: 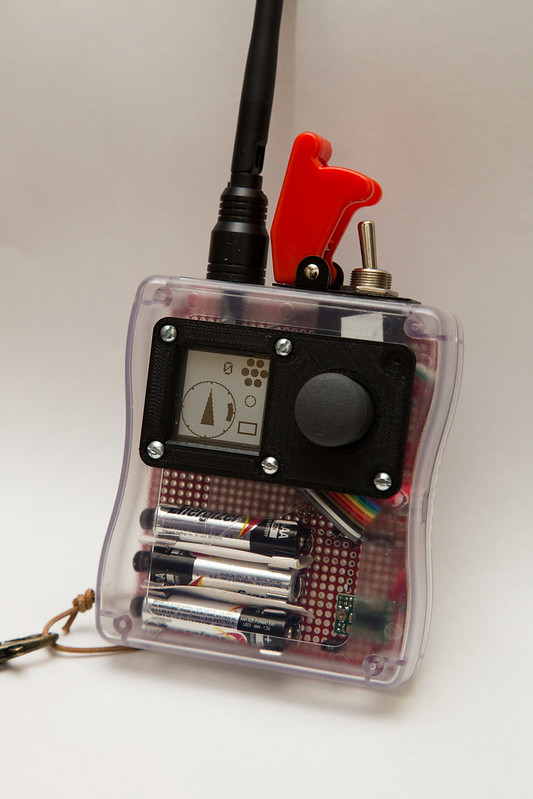 The compactness of this design prompted me to build my own. Being impatient I decided to cut out the Arduino aspect and simply hack an existing transmitter, this worked but I was left with a fairly hefty unit that has range issues:

It works but could be better…

Closer to home West country kapper Dave Mitchell began posting details of of his version using a Spektrum transmitter and a video down link.

Dave Mitchell’s design eschewed the 3 way joystick control and he has published code that works for the Spektrum RF unit. Dave wheeler used a Hobby King T6A RF unit- I have various hacked Spektum units lying about waiting to be useful so I decided it was worth a go: getting kit as compact as possible has got to be good- and my parts bin contains many of the bits the project needs. My last overseas trip involved excess luggage charges and I’d like to avoid that next time…

The catch is the programming: better minds than mine have worked on this and there are surprises.

Getting this right is exasperating, finding the libraries, finding the tweaks, trying and re-trying the compile seems to eat time like nothing else I know. Eventually patience is rewarded with the message:

The serial monitor is confirmation the board is working and the displayed values give clues as to the magic numbers needed to trim the servo movements:

As I got more familliar with the IDE I found it to be a powerful tool- I could use it to modify the servo movements and even invert the shutter servo movement*- clever stuff!

So now I have a cut down replica of the Spektrum transmitter I looted the RF module from. What’s the point of that? I hear you cry. Well there are 2 . First I have a much smaller unit: it uses only the bits of the transmitter I need so I have a smaller collection of parts..and second I have the potential to run a programme of movements over radio control.

.. a push button momentary switch is fitted, wired in and tested

I’d say the space saving is around half that of the DX5e:

Smaller with 3 out of 5 channels in use…

it weighs about the same, the battery being the heaviest item.  The Arduino version has a tougher case…

I chose rugged switches for durability: kite flying is tough on equipment

With much thanks to David Mitchell I was able to get the sketch to work with a 360 servo. First flight proves the utility: I can stuff the thing in a jacket pocket to haul line …

Video break up occurred when I tried to shade the screen by turning it away from the rig and blocked the line of sight to ground.

Lightweight,  chuckable and with a view from the camera…

*The Ricoh GR shutter caused some grief, I discovered the Gent 122 USB cable required the shutter up and down codes to be reversed :

Next, the manual /auto switch.

Heritage worker
View all posts by billboyheritagesurvey →
This entry was posted in KAP. Bookmark the permalink.