From KAP to map

Posted on May 23, 2014 by billboyheritagesurvey
With scale and chain you may obtain
The knowledge of your ground.
If that you try all points thereby
Each figure will be found.
Your compass stride on every side
Each angle it will shew
Do all with care you need not fear
Your work will all be true.

From the scale bar of Corlnelius Brewer’s map of Sudbury 1714.

In testing swath cover by KAP I have come to the conclusion that the overriding concern is wind speed. Consistency of cover needs consistency of lift and this can only occur with a reliable blow. General, oblique views may be possible with light winds but a nadir sweep needs a steep flying angle flown at the apex of the permitted envelope. In terms of aerial platforms a kite at 60m has a very small footprint on the ground. To get good cover over a 300m x 300m area, in ideal conditions, around 200 images are required assuming an overlap of 50%.  A kite has other ideas. It rises, falls, and in doing so sweeps up and down wind, in short its path is a poor one from the mapping point of view.

Approximately 6Ha were mapped from 230 images taken from a kite lofted camera:

To date I have tested the theory that KAP is a mapping tool on small areas, the results are encouraging and developing practice for wider cover is now required. As a birthday present I decided to return to a favourite site to see what can be done. What better way to spend the day in good company with a strong breeze and good light? Warham Camp, like many large landscape features, is a magnet for PPL as well as KAP fliers and I chose a working day with a good Bft4 bluster which usually keeps all but the bravest on the ground. For the purposes of photogrammetric capture by aerial survey earthworks are  prone to data loss in shadow, vertical light washout and vegetation masking. The problem is: how do I get a reliable swath at a resolution good enough for a 1:200 scale contoured plan? So far every time I try to do this I end up with incomplete cover. I need to practice sweep rate, flying height and offset for mapping.

Nadir image cover. An APSC (23.6 x15.8mm) format camera with a 24mm focal length lens gives nadir ground coverage at 60m AGL of 59m x 39m. (There are loads to choose from – Canon, Ricoh, Sony, Fuji all have APSC compacts now but I use the 1st and best: Leica x1.) Stepping up to a ‘full frame’ Sony Rx1 with its 35mm lens gives a similar 60m x 40m footprint but with a 1/3rd increase in resolution.

Swath capture. The camera under RC control can shoot up to 6 frames in 3s. The swath width was increased by tilting the camera off vertical using a burst, tilt, burst,  sequence to cover the target. thus a 3 step pass starting at nadir at each static position was achieved. 2 swaths were taken walking the kite along tracks about 20m apart. Video relay ensured camera orientation and OSD GPS allowed height control. As far as possible shots were taken under slack line by walking zig-zag across the parallel track. This is team work, briefing the camera op is crucial.

Camera condition. The Leica X1 AF was set to single point with ISO locked to 800. Shutter speed and stop were set to Auto and the shots came in at shutter speeds of 1/250th to 1/800th depending on orientation. A CPL filter was used to counteract glare, camera movement was smoothed by a GS1 gyro servo on the tilt axis.

The first pass ortho from 27 images:

Shows a 3rd pass would have been desirable to complete cover on the Western edge. The 2 passes took an hour of slow walking with 3 tie offs to convenient fence posts along the upwind edge of the site. 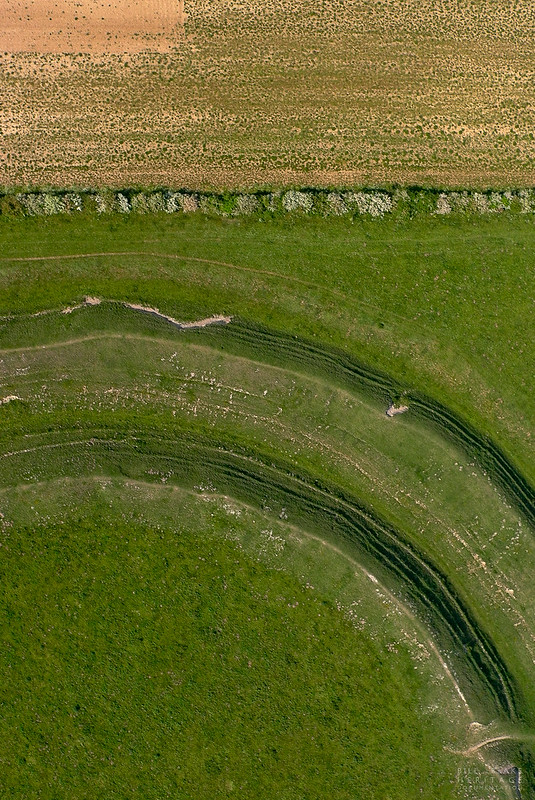 The captured images were re-sampled down to 2mP from the native 5mP. 54 images were selected out of the captured set of 277 for photogrammetric processing.

Even with a good steady 16mph between 16.00 and 17.00 the downwind stand off varied a great deal. Note that the more oblique images have more data loss (black holes in the orthophoto) on the surface model.

Permission to fly. The site at Warham Camp is open to the public, is grazed by a herd of cattle and is protected by law as both a Scheduled Ancient Monument and as a Site of Special Scientific Interest (SSSI) so it has legal protection:

It is an offence under Section 28 P(6) of the Wildlife and Countryside Act 1981 (as incorporated by the Countryside and Rights of Way Act 2000), without reasonable excuse, intentionally or recklessly to destroy or damage any of the flora, fauna, or geological or physiographical features by reason of which land is of special interest, or intentionally or recklessly to disturb any of those fauna. A person found guilty of any such offence may be liable on summary conviction to a fine not exceeding £20,000 or on conviction on indictment to a fine.

Any action deemed ‘reckless endangerment’ of Scheduled Species runs the risk of prosecution under the Wildlife and Countryside Act 1981. Kite flying is considered such a risk, particularly to nesting birds. The Warham Camp SSSI Designation posted by Natural England concerns the rare chalk upland plant life and does not include scheduled bird species making the risk of prosecution for kite flying low.

As the site is neither a National or Local Nature reserve the Natural England ‘standard’ N and LNR byelaw banning kites is not in force here.

Kite. My current favourite for most work is Christoph Fokken’s ITW Levitation 9′ delta. It is easy to launch in wind shadow and has a great wind range. The wind speed at an average of 16mph was enough to require use of a ratchet for recovery but ensured a steep flying angle and narrow offset. The location is a valley site and the wind at 60m over the monument was a ‘saucer top’ flow, the line revealed an ‘S’ profile for most of the flight, only straightening out as it was walked over the valley crest.

At the top end of Bft 4 the 800g rig got the best view over the shortest distance. Maintaining consistent height is the single most important aspect to KAP for mapping.

8,100 3D points were extracted from the surface model from photogrammetry and collated into contours using TheoContour, the easy way of generating polyline contours in CAD.

The mesh surface in CAD. The vertex density falls off pretty quickly from the nadir zone. Point density is between 210 and  60 points per square metre.

The ortho-image with contour overlay.

2 Responses to From KAP to map