Posted on April 3, 2014 by billboyheritagesurvey

Mike LeDuc came up with a brilliant mod for the ITW Levitation delta. He spotted the tendency for the spreader spar to snap under excess load and instead of the obvious ‘replace with a stronger spar’ solution developed an elastic version which would shorten under load. His design is elegant and has proved successful. I want one.

I began to collect the parts I’d need to make it with help from Manfred Kluge at MK kites/Kites 4U and came up with 2 x 825mm pieces of ‘Excel Cruise -6’ carbon with nocks.

The hard bit was the captive nylon bushes Mike used: they require bonding and precise pinning. I didn’t like the idea of pinning anything to the precious carbon in case I over did it and split the spar- carbon is funny stuff and I treat a bit like glass, it’s likely to shatter unexpectedly if you abuse it.

So what to do? I put the bits I had in a corner and got on with other things. Once in a while I’d lay out the pieces out and ponder: how am I going to get a parallel motion constrained between the 2 pieces?

The tried and tested method of beefing up the Levitation is to replace the spar with 8mm carbon. I have done this and it works well. I decided to do the same for the PFK Nighthawk in an attempt to smooth its jerky behaviour in Bft 5. If it works for the one delta surely it should work for another? It does: I ordered the required Skyshark 8P, cut it to length and the tawa spar was replaced: easy!

The Nighthawk is softened a little by using the carbon and its weight is reduced a fraction. I was pleased with the result….and I had a 2 short pieces of 8P tube left over…and that got me thinking:

..the ‘rigid’ constraint is duct tape ( the engineering ‘solution’ for things that shouldn’t move) I wound the tape carefully, starting at the centre, to avoid twist and to keep the weight balanced- if nothing else this would be ‘proof of concept’ while I thought of something better…the old ‘temporary permanent’ solution.

MK kites supplied lovely ally nock ends, plastic ones are available but I like the purple anodising. The 6mm Cruise spar slides easily in the 8P guide.

I have a good stock of ‘size 84’ rubber bands for powering my silly putty rig. 2 looped together proved to be just the right length. The replacement spar fits the kite easily and it flew well, at first the kite heeled to the left so I slid the tubes to the right and this centred it. As I wondered if I needed some method of centring the kite flew steadier and steadier. On returning it to the ground I found the tubes had begun to twist apart forming a dihedral, I began to think, provided the movement didn’t continue, that this is a self centring spar!

The dihedral is very slight and has not shifted so far. There is a tendency for the opposite ends of the spars to touch the kite sail as they push inwards under extreme load.

I have put about 2 hours flying time into it in various winds and it’s coped well. I check the orientation and centring of the tubes before flight to make sure they don’t present an anhedral aspect.

I think the thing would naturally slip round to the dihedral position but I don’t want to find out in mid flight. An exaggerated view of the geometry shows why, once the 2 tubes have shifted to form an ‘x’ they become self centring:

The stretch of the duct tape has found its own centre between the 2 tubes and this balances the elastic movement: a happy outcome provided the tape doesn’t stretch further and un-stick altogether.

For a parts bin lash up this has worked well and I have avoided epoxy bonding and introducing pins to the carbon. It may be a bit on the heavy side but it definitely improves the wind range of the kite. 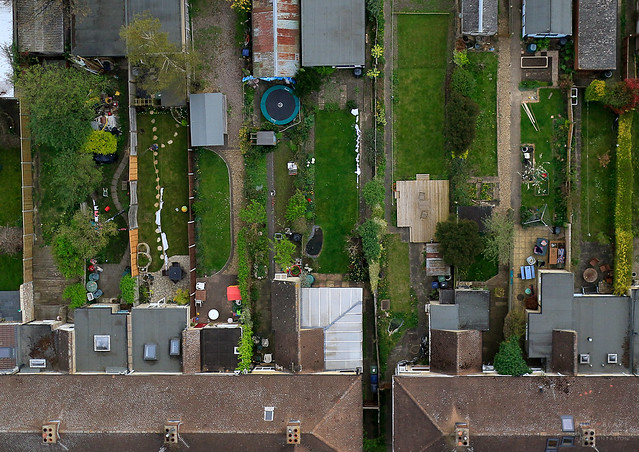 Test shot at 16mph wind speed. Things didn’t go so well on recovery, the kite slewed into a tree and, in tugging it out I knackered the spar, the duct tape stretched to the point where it no longer locks the ‘x’…a stiffer bond is needed!